Greece is not known for its wines, but a new crop of wine bars in Athens offers locals and tourists the chance to sample some excellent homegrown varieties 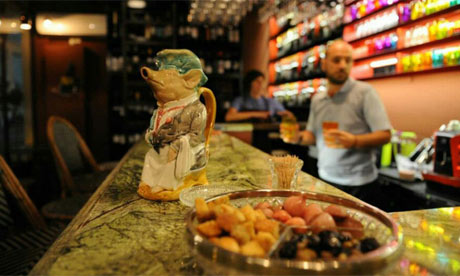 At Heteroclito wine bar in Athens, all of the wines served by the glass are Greek

The economic crisis that has plagued Greece for the past five years has led to changes on the Athenian culinary scene, including the opening of three new types of venues that seem to be reflective of the times. The first two – cupcake places and frozen yogurt shops – are imports from abroad, perhaps indicative of a population in need of something sweet, comforting and affordable. On the other hand, the third trend, wine bars, digs deep into Greece’s roots, representing a fascinating phenomenon in a country that is one of the world’s oldest wine-producing regions.

In antiquity, Greek wine was exported across the Mediterranean, and the winemaking tradition has remained strong through the millennia. Yet although there are numerous wineries around the country, in the modern era Greek wine has never achieved the place it deserves on the international market. Production levels are low and vintners have long been unsure of how to market abroad. Outside Greece, one might at best find retsina, a sweet wine infused with pine resin that’s reminiscent of the wine used at Communion, or mavrodafni, a red varietal with an almost industrial flavour. But with Greeks themselves increasingly consuming wine, these days a new crop of wine bars has opened inAthens that give both locals and visitors the chance to taste some great domestic varieties.

Oinoscent (which we previously mentioned in our Athens Best Bites of 2012) was the first wine bar downtown when it opened a few years ago and is still very popular with young professionals. The atmosphere – which, unlike most bars in Athens, is strictly nonsmoking – is smart yet casual, with aluminium chairs and warm decor. (Don’t forget to check out the über-sleek wine cellar downstairs.) Oinoscent’s owners, two lovely brothers in their late twenties, are happy to offer informed advice in English about what to choose from the wine list. The snacks are also excellent: in addition to the barley rusks (think big, fat rustic croutons soaking in olive oil) and olives and the truly fantastic cheese platter, there is an excellent mozzarella di bufala with baby tomatoes.

The short, carefully selected wine list at Oinoscent is balanced between domestic and foreign wines, but the real adventure lies on the list’s Greek side. We particularly like the Mikri Kivotos, a blend of agiorgitikograpes from the Nemea region of the Peloponnese and xinomavrograpes from Amyntaio in northern Greece. Often characterised as Greece’s merlot, xinomavro is one of the most promising Greek varieties, at once dark (mavro means black), dry and rich in flavor. If you are aiming for white, another interesting option is Magiko Vouno (“Magic Mountain”), made by Lazaridi Winery in Drama in Northern Greece. This is a popular sauvignon blanc in Greece and is an elegant, exuberant wine with fruity notes. 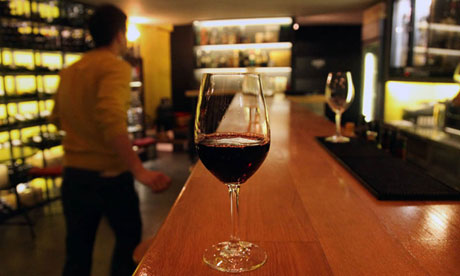 Oinoscent wine bar. Photograph: Manteau StamLocated just off Ermou, Athens’ biggest commercial street, Heteroclito(which means “heterogenous”) opened its doors in late summer 2012. The place is our favourite in terms of decor: the downstairs area is like a nonsmoking French bistro, while the smoking area upstairs is an ode to 60s and 70s Athens, with mosaic floors and Danish furniture. The emphasis here is on Greek wine and Greek grape varieties, something that the owners, Madeleine and Chrysoula, are always keen to point out. Indeed, all of the wines served by the glass are Greek.

We loved the malagousia – one of Greece’s best-known aromatic varieties, grown in both the Peloponnese and northern Greece – from Arvanitidis Winery outside Thessaloniki. This delicate, aromatic white grape had become virtually extinct by the 1980s, when Gerovassiliou Winery resuscitated it and turned it into a leading Greek wine, especially in the foreign market. Greece’s dessert wine tradition is also worthy of note. Some of the country’s best dessert wines are produced by a co-operative on the island of Samos. The award-winning Samos Nectar, which has a rich, sweet taste with an almost raisin-like aftertaste, is considered one of the best in its category – and, at €4 per glass, it’s also a great deal.

There are two even newer entries to the roster of downtown Athens wine bars. By the Glass took over one of the Syntagma area’s most beautiful arcades, opposite the city’s Russian Orthodox church, to open a clean (no smoking allowed) bar with an interesting twist. Customers can pick and choose what they want to try and in what quantity, with glasses offered in 25ml, 75ml and 150ml. There are about 90 labels available, of which 19 are offered by the glass, making the venue a great place to taste different varieties. By the Glass attracts a somewhat older and more mature clientele.

Also brand-new, Harvest is located at one of our favourite street corners, where the pedestrianised Aiolou meets Evripidou, a traditional downtown trade street famous for its spices and pastirma shops. Run by the young and enthusiastic Evangelia Kontopoulou, Harvest is a place we have grown to love. The decor – funky ceramic tiles on the walls, large communal tables – is gorgeous. Thanks to both the menu and the wine list, Harvest attracts a mixed crowd, from young couples and singles to folks in their sixties. The food selection is reason enough to come here, though the tapas are on the pricy side. In our opinion, the best value-for-money items are the tostas, open grilled sandwiches served with salad on the side, of which our favourite is the one withjamón (Spanish ham) and tomato. We’re also fond of the (very Spanish)fabada, a delicious mixture of white baby beans and chorizo in red sauce.

We imagine that in a few years from now, Athens will most likely have far fewer cupcake bakeries and frozen yogurt stands. This new crop of wine bars, on the other hand, seems like it’s here to stay. We’ll drink to that.